Adamed was among companies nominated for the Economic Award of the President of the Republic of Poland in "National Success" category. This distinction has many years of tradition and it promotes entities building a positive image of Polish entrepreneurship on the international arena and is an example of the best practices of global expansion of domestic know-how and innovation.

On 4th November  during the ceremonial gala in Rzeszów, the Economic Awards of the President of the Republic of Poland were presented for the nineteenth time. Adamed Pharma, nominated by the Polish Chamber of Commerce for High Technology, was among the nominees in  "National Success" category. The nomination was collected by Maciej Adamkiewicz, co-owner of Adamed. The presence of Adamed among the elite group of nominees proves the key role of the company on the economic map of Poland. It is also an expression of appreciation for the responsible and sustainable development of Adamed and its leading role in ensuring the country's access to medicines.

Adamed is a family-owned pharmaceutical and biotechnology company with a 100% share of Polish capital, which was founded on the basis of Polish scientific thought and own patents. Established 35 years ago, today it employs 2,200 people, has 2 production plants in Poland and one in Vietnam. The pillars of the company's development are investments in increasing the production of drugs in Poland and in innovation, as well as international expansion. Adamed is working on its own innovative drugs. The company's intellectual property is protected by nearly 200 patents in most countries around the world, and its portfolio includes over 500 products. Each year, the company produces over 2.3 billion tablets sold in 76 markets around the world. It ensures access to medicines to millions of patients in Poland and many other countries. It contributes to the development not only of the domestic pharmaceutical market, but also - due to the scale of the enterprise - of the entire Polish economy.

The Economic Awards of the President of the Republic of Poland are awarded once a year. To the nineteenth edition, economic and local government organizations submitted 200 institutions. Nominations chaired by prof. dr hab. Krzysztof Opolski was awarded to 21 companies in five main categories: SME Leader, National Success, International Success, Responsible Business, Family Company and two special ones: Research + Development and STARTUP_PL. 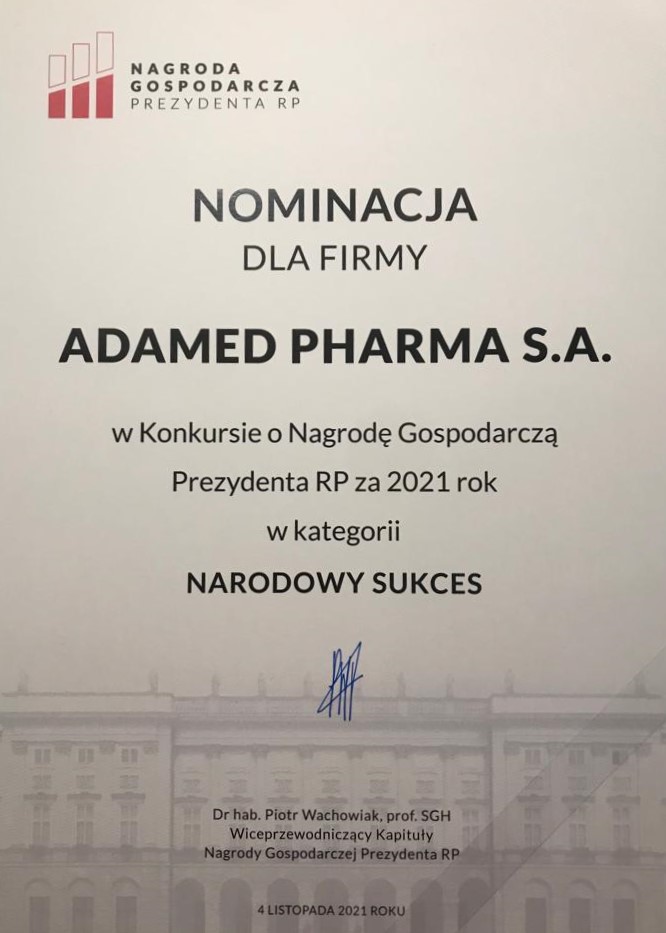